Filmmaker and photographer Jeanne Hallacy poses for a portrait in front of The Roxie Theater in San Francisco’s Mission District on Saturday, Oct. 20, 2018. The Roxie Theater is one of the screening locations for her latest documentary film “Mother, Daughter, Sister.” (Photo by Ekevara Kitpowsong/CurrentSF)

Filmmaker and photographer Jeanne Hallacy travels the world screening her human rights films about women and children living in high conflict regions, particularly in Southeast Asia, though when her audiences find out she’s originally from San Francisco, the conversation takes a more personal turn.

“They ask me, especially throughout Asia, how can it be in a developed country, in a city with such wealth, that elderly women should be living homeless on the street,” said Hallacy, who finds herself unable to account for the cruel ironies of life in America’s wealthiest city, though she is certain that comparing the struggle for human dignity from country to country is not the answer.

“For the person who’s suffering, it does little help to her to know someone is doing worse,” she said over coffee at Muddy Waters on Valencia at 24th Street.

Hallacy’s lived in Bangkok since 1992, and was here to screen and talk about her latest film, “Mother, Daughter, Sister.” The film is about women battling sexual violence in Myanmar, also known as Burma, where a refugee crisis at the border with Bangladesh continues to unfold. “Mother, Daughter, Sister” is a sensitive and stark, sometimes graphic and always moving portrait of ethnic Rohingya and Kachin women fighting for justice and a reprieve from violence waged on them at the hands of the Burmese military. The film was partly inspired by its predecessor, “Sittwe,” about two 16-year-old youths, one a Rohingya girl and another a Buddhist boy, living on either side of the apartheid divide.

“They were the kids who’d been displaced from the first wave of serious violence in 2012 that resulted in what we’ve seen now,” explained Hallacy. “That was when the targeted attacks against the Rohingya began, largely in Sittwe [capital city of the Burmese state of Rakhine], when most of their communities were burned to the ground.”

She explained that the violence has been primarily carried out by “mobs of civilians led by ultra nationalists in this hysterical fervor,” and that “the police and armed security forces didn’t do anything to quell it.” The period marked the beginning of the massive displacement of the Rohingya who lived in Rakhine State, relegating them to “internally displaced person camps” (a term for refugees) in their own land, located just a few kilometers from where they grew up in downtown Sittwe.

While Hallacy and her team were making “Sittwe,” a second wave of violence occurred in 2016, and that time, it was carried out by the military.

“That resulted in 60,000 fleeing to Bangladesh and we’d heard reports of sexual violence that included teenagers,” said Hallacy.

Myanmar is on the U.N.’s registry of abusers noted as the “list of shame,” and yet the young women have found little acknowledgement, nor a platform for justice. Enter Hallacy, an experienced filmmaker on the subject of Burma, and her crew, who gathered Rohingya survivors and placed their interviews at the center of the film. Both Shamima and Dil Kayas display courage in the face of trauma, though their fear is palpable as they revisit unspeakable acts of sexual violence. The film also charts the stories of two Kachin women determined to tell their stories: San Lung and Lu Bu, the mother and sister of two school teachers who did not survive the violent attacks.

Lu Bu is the mother of Hkawn Nan Tsin, a Kachin volunteer schoolteacher allegedly raped and killed by the Burmese military. She and her children live in a camp for internally displaced persons in conflict-affected Kachin state in Burma. They have been displaced twice by war in Kachin state. (Photo courtesy of Kirana Productions) 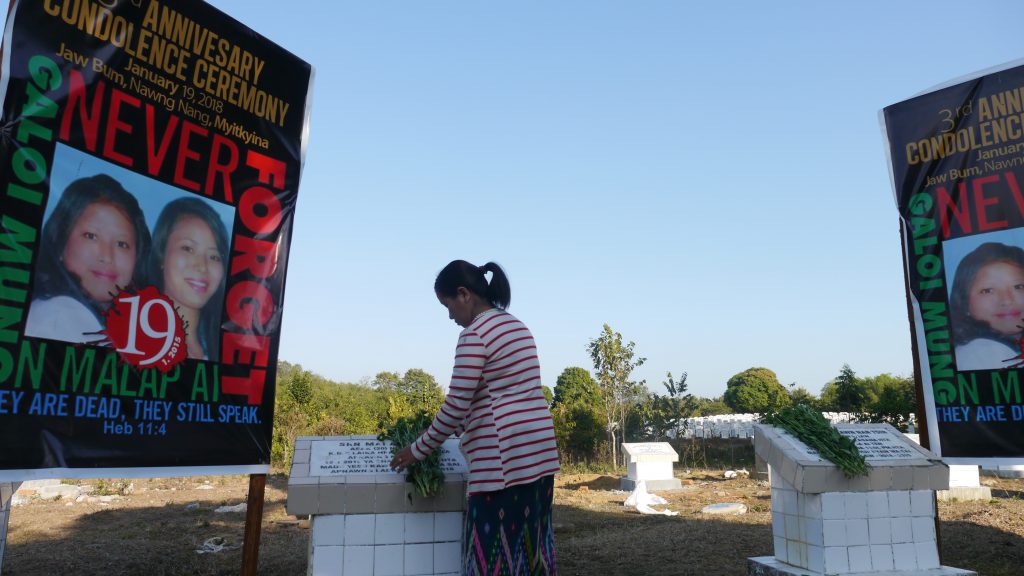 San Lung is fighting for justice for her younger sister, Lu Ra, a Kachin volunteer school teacher allegedly raped and killed by the Burmese military. She formed a group for Kachin women who suffered human rights abuses. (Photo courtesy of Kirana Productions)

“Sometimes you’re not certain of your concept or who the characters will be but the documentary gods send them to you,” Hallacy said, recounting how Shamima came to be a central figure in the film.

“We went blind to the camp and went looking for people,” she said. “Shamima was someone we met because she was going to help us find girls and I said, ‘No, we’re going to stay here and talk to her.’ I saw the promise of how this could end, if everyone had her spark and education.”

Shamima is a Rohingya community activist working to empower young women in the refugee camp in Bangladesh. (Photo courtesy of Kirana Productions)

Shamima was a third-year university student when the wave of violence hit, crushing her dream of moving other Rohingya girls beyond illiteracy and a toward higher education. As a refugee, she continues her pursuit, helping young women and girls find their voices against a backdrop of chaos.

“We had a translator ready to receive us but it was challenging to locate women who would talk with us, to get permission and see even what state of mind they were in,” Hallacy said, explaining the process of locating her subjects among the million people living on the border of Rakhine State, in what is now the world’s largest refugee camp. “Shamima was how we got access to Dil Kayas and other teenagers.”

“It was a very ginger approach, getting to know them and gain trust,” she continued. “I brought some art supplies and we did art therapy before we even sat down to do the interviews. When you’re dealing with teenagers who’ve been traumatized as such, many of the girls we’d talked to not only experienced sexual violence but had witnessed another spate of horrors that traumatized them.”

Hallacy made two trips to the camps and conducted several rounds of interviews. “We went twice to Bangladesh in January and June and twice to Kachin state in February and July, after the wave of 2016 violence that resulted in the exodus.” The aerial views of the camp captured in “Mother, Daughter, Sister” may give the viewer some idea of the enormity of the crisis, but Hallacy stressed how dire the conditions are.

“I’ve been doing this work for 31 years and it’s indescribable,” she said. “They clear cut forest area to make room for people, tens of thousands. The hills are just sandy silt so when the monsoons and rains come,” her voice trailed off, signaling the inevitability of what happens when human crisis and nature collide. “One million people crowded into a four-square mile area, it’s like all of San Francisco being crowded into the Mission and the Excelsior districts,” she said.

Filmmaker and photographer Jeanne Hallacy poses for a portrait in front of The Roxie Theater in San Francisco’s Mission District on Saturday, Oct. 20, 2018. The Roxie Theater is one of the screening locations for her latest documentary film “Mother, Daughter, Sister.” (Photo by Ekevara Kitpowsong/CurrentSF)

From San Francisco to Southeast Asia

Hallacy’s own life in the Mission District started among seven children in a multi-generational Irish Catholic family.

“Aunts, uncles, older relatives… Up to 12 people at the dinner table every night,” she said. She traces her interest in politics back to childhood. “I was the only one in my school who would read The New York Times. I was really interested in protest movement and social change.” Her older siblings were involved in the anti-war movement, against the war in Vietnam. “The music was based on messages of change,” she said. “It definitely all swayed me.”

Studying photojournalism at City College of San Francisco, in the course of doing more in-depth reportage, she naturally gravitated toward video storytelling.

“I found there was a space there to give voice literally and symbolically in a way you couldn’t do with photographic images and texts, and it was something I felt compelled to do when I started meeting people affected by human rights issues,” she said.

“I suppose part of my interest in wanting to travel and bust out was to have my own identity. I certainly had my share of challenges in my family. It was bootcamp for me: It increased my ability to empathize with people and create a space they can share their story with me.”

Leaving home for the first time with $300 and two blocks of film, she headed for the Philippines.

She stayed for five years.

“It was during the Marcos dictatorship. There was the armed resistance in the jungle and civil organized protest during the so-called ‘People Power Revolution,’” she said. “I spent a lot of time in the jungle, with access to New People’s Army and guerrilla camps in the jungles, documenting the situation and became intrigued by how children are impacted by conflict.”

Returning to San Francisco, she remembered a colleague said, “If you’re interested in children and conflict, you should go to Burma.” At the time Hallacy knew very little about the border area between Thailand and Burma, the ethnic groups living there and the student army. “I went to do research and that film, ‘Burma Diary,’ took five years.” It was the beginning of her continued forays to Burma.

“I had never been in a country under such military control. At the time it was likened to North Korea. There was no internet, no mobile phones, faxes were illegal,” said Hallacy, who eventually created her own network. “Before I knew it, I ended up staying.” Along the way she learned the Thai and Burmese languages (she also speaks Tagalog and Spanish).

“I’m not fluent in any language and would never conduct interviews in them but I can chatter with people. The languages wouldn’t help me anyway because the Kachin women speak Kachin and the Rohingya women speak Rohingya,” she said. She also persists in learning Burmese language in written form.

“The only way to really know a non-Roman language is to write it,” she said.

And while her life is centered in Southeast Asia, she still considers San Francisco home, though she’s concerned about the direction the city has taken. “I can hardly recognize it here,” she said. Despite the changes, Hallacy still finds reason to be hopeful.

“Any thinking person who follows the news knows there is a resurgence of the ultra-right wing and It’s a global phenomenon: Italy, Austria, the Netherlands, Brazil… it’s a pattern and it’s of deep concern,” she said. She takes encouragement though in the resurgence of activism and the formation of Black Lives Matter, the Women’s March and environmental groups.

“The solutions are within ourselves,” said Hallacy. “We can all look for ways to contribute and be a part of something greater.”

Contributing Writer
Denise Sullivan is an author, culture worker, editor of “Your Golden Sun Still Shines: San Francisco Personal Histories & Small Fictions,” and the SF Lives columnist at The San Francisco Examiner. Follow her at www.denisesullivan.com, and on Twitter and Instagram @4DeniseSullivan

Like Loading...
Previous ArticleWomen of the Resistance: Next wave of mujeres muralistas brightens Balmy AlleyNext ArticleOakland muralist committed to painting people and their places

A view from the border: photo exhibit by Tijuana native captures nuance of migrant experience